Fear the Taste of Blood is an rpg for 1 to 3 players about a monster in the night, and the survivors who must face it. It’s a game inspired by classic movie monsters; towering aristocratic vampires, frightful werewolves, constructed creatures and invisible fiends. Throughout play you’ll record the attacks of the monster, how the survivors try to fight back and deal with the horror they are facing. You’ll draw cards, roll dice, pull cards from a deck and make a living record of the monster and the people it threatens.

Based on Beyond the Rift by Dee Pennyway

Fear the Taste of Blood is designed for three players, each of whom takes on a specific, asymmetric, role throughout play.

One person plays the Night.

The Night is the world of your story, a world that is more frightening and unknowable than everyone has realised until now. In play the Night will breathe life into your setting and the other characters who live there.

The Night plays cards to determine nature of scenes, judges relevancy of Damage, narrates scene settings and plays any characters other than the focused Survivor.

One person plays the Monster.

The Monster is something strange and dangerous. The Monster seeks to attack and destroy the Survivors in the Night. They might be someone afflicted by a horrible curse that takes away control and gives them destructive ability or perhaps their origin was more unnatural to begin with. They might be an ancient power with cruel plans or a wrong to avenge. You will attack. You will kill. Until you are destroyed. For now.

The Monster plays and defines the Monster, rolls dice to determine the Damage and Destruction and ultimately faces destruction or triumph.

One person plays the Survivors.

The Survivors are four ordinary people who find themselves in grave danger, face to face with a monster from their worst fears. Survive if you can, hold tight what you love.

The Survivors plays four key characters, draws cards to determine the focus character of a scene, tries to gather gather the Monster’s Weakness, keep a record of the horror, and either survive or perish.

As featured on i09s the Gaming Shelf

Available for purchase print-on-demand here. If you purchase a physical copy email us at mackenziealter@outlook.com and we'll send you a download key for free.

In order to download this game you must purchase it at or above the minimum price of $15 USD. You will get access to the following files:

If you are unable to afford a copy or are from a marginalised community then feel free to claim a free copy of the game, on us.

We'd appreciate if you rated the game and maybe wrote a comment but that isn't a prerequisite for claiming a copy.

Fear the Taste of Blood is a great game for anyone who enjoys classic horror movies. I think this would be perfect for playing with friends on a dark and stormy evening.

I created a short video review:

Phillippa Mort took a closer look at the game which you check out here! 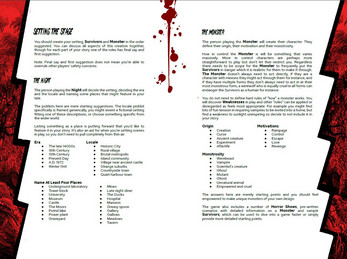 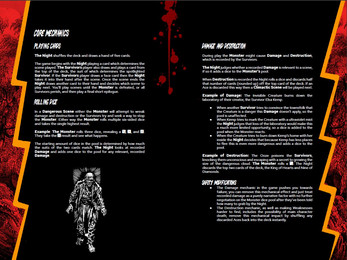 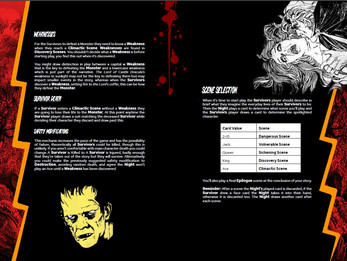 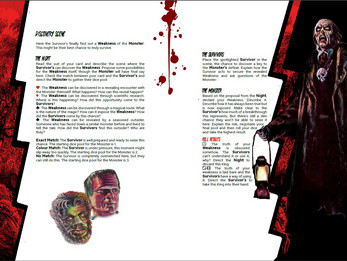