A demonic heist game. A zero-prep, GMless game for 3-5 players and one session, using playing cards. A hack of Stealing the Throne.

You came to regret this.

The problem with making a diabolical deal with a Dark Power is that they’re reluctant to re-negotiate.

But there are others like you. Damned. You are not unique in your dealmaking. Some of them feel the same. They want it all. The cost and the gain. So you hatch a plan. You’re going to break into the domain of your Dark Power. You’re going to take your soul back and get the hell out of there.

In order to download this game you must purchase it at or above the minimum price of $10 USD. You will get access to the following files:

If you'd like to purchase the game but can't afford the full price feel free to buy at a reduced cost here, no questions ask.

If you're from a marginalised community or otherwise wouldn't be able to afford the game then claim a free copy, on us, no questions asked.

Save Our Souls by The Dice is a really cool game that plays on the trope of people selling their soul to the devil or some other dark power. You play as those of the soulless who have since regretted the deal they made, and are going on a heist to get them back.

Save Our Souls is a hack of Stealing the Throne, which includes Lovecraftesque and a little known game called The Sol Survivor as its inspirations. It is a GMless game with a tripartite role structure, and the names for each of the roles are really clever. You have the Damned Thief, which sounds epic and fits very well with the theme. The Dark Power gets to control the obstacles that the Damned Thief faces, and the Potential Saviours may help or hinder them. Each player plays one of the Damned Thieves and have a go at reaching the Trophy Room to reclaim their soul. Once every Damned Thief has reached the Trophy Room (or die trying), they can make a daring getaway. It makes for a climatic escape from hell, with other thieves being potential traitors who would stab you in the back!

Overall, I love this game, and I would recommend it to folks who are into GMless games and/or stories about demonic bargains. 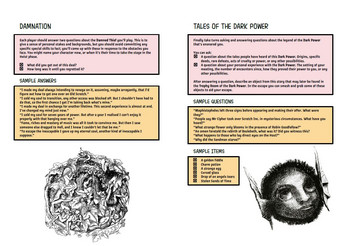 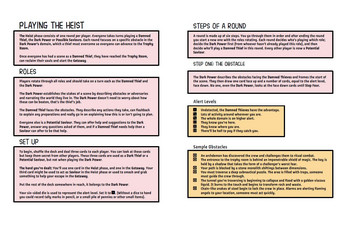